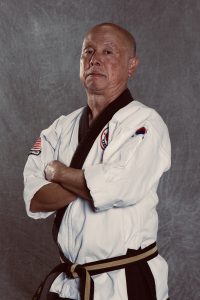 Dennis Ichikawa is the Chief Instructor and owner of Thousand Oaks/Westlake Karate Studios. He began his martial arts study in 1970 in the Chuck Norris system of Tang Soo Do.

He received his Bachelor of Arts degree in Public Service from U.C.L.A. in 1969. In the early years, he trained under such martial arts greats as Chuck Norris and Pat Johnson.

In November of 1971, at the rank of 4th gup (level) green belt, he became manager and daytime instructor at the Norris studio in Sherman Oaks, California. After earning his first dan (degree) in November of 1973, he opened his own studio, the Tarzana Karate Studio, with partner, Harold Gross in 1974.

Mr. Ichikawa moved his residence to Thousand Oaks in 1981, and started a Tang Soo Do program at the Thousand Oaks Community Center under the Department of Parks and Recreation in June of 1983. By 1986, the program grew to over 170 students. The Thousand Oaks Karate Studio was opened in 1987.

Then, in 1987, Mr. Ichikawa created the “AMERICAN TANG SOO DO ALLIANCE” to join together all the studios of his Black Belt students as a formal organization. The Alliance currently consists of the Thousand Oaks, Acton, Eagle Rock, Chatsworth Karate, Statesboro Karate and The Way Studios. Many of his students have gone on to form their own studios throughout the state of California, and enjoy the close attention and leadership that Mr. Ichikawa provides to all his students, from first-time members all the way to black belt studio owners.

Mark Cox started his training in 1983 under Grand Master Dennis Ichikawa in Tarzana. His love for the Martial Arts and teaching even when he was a lower ranking student was evident from the beginning.

Mr. Cox was born and raised in California. He earned his 1st degree Black Belt in Tang Soo Do under Dennis Ichikawa in 1987. He now has 4 children; 3 boys and 1 girl. Michael, Gabriel, Daniel, and Ariel). Mr. Cox had very meager beginnings; in 1987 Mr. Cox was a machinist and part time pool man with a mega dream. His dream was to have a martial arts studio that impacted the lives of 1000’s. His goal was to have over 100 Black Belts. Through God’s direction and perseverance Mr.Cox now operate one of largest schools in the San Fernando Valley that presently has over 265 Black Belts.

Mr. Cox believed in himself and overcame very trying times and his school now impacts this community in a very positive way. As a Deputy Sheriff, Mr. Cox understands and works hand in hand with law enforcement to help keep our officers safe.

Interested in trying a class? Click here to fill out a Guest Application and try a week for free!